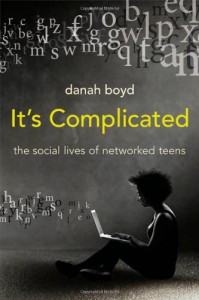 I recently finished reading danah boyd’s1 excellent, It’s Complicated: The Social Lives of Networked Teens (non-affiliate link). boyd spent over a decade traveling around the United States interviewing teens about their use of social media and has combined these interviews with a lot of research into this amazing, wonderful, and enlightening book. The central message is exactly what I have been feeling and starting to express here: that the vast majority of the evils and ills of social media are vastly overblown by the media and by parents who are largely ignorant of what is really going on.

She divides the book into the following chapters:

In each she uses a mixture of quotes from her interviews with teens, findings from research performed by her and others in this area, and then her own analysis. Her anecdotes are insightful, sometimes moving, and always interesting. And I was pleased to find that my own thoughts on these matters were validated by her research.

The central message of the book is, essentially, chill out. Every new technology brings with it a certain level of hysteria over how it is going to destroy the world, or at least lives, or eyesight, or any number of other fears. boyd points out how novels were seen as a dangerous thing for women in the 1800s, and TVwas dangerous in the 1950’s (and my other examples besides). Fear of new technologies, especially ones that the older generation does not understand, leads to a mass hysteria of how horrible and evil it is.

The chapter on addiction really got my brain spinning. I’m thinking back to the parent who raised those panicky issues at that meeting at my son’s school a few weeks ago (as referenced in “Fear and Panic vs. Education and Common Sense”). As I mentioned, he spoke out about his great fear of social media addiction. He was very effusive about it and clearly very concerned. I refuted some of that line of thinking in that article but this particular chapter in boyd’s book coalesced my thinking even more.

Teens today have far less freedom than their parents did at that age. When I was in the second grade, I walked the half-mile-plus to school, going up over the top of the hill my neighborhood sat on to the mysterious land on the other side: the next neighborhood over. When my son was in the fourth grade, we finally, grudgingly, let him walk to school. His school was downhill from our house, three streets down. The walk takes about 5 minutes. And we tended to shadow him to make sure he was OK. boyd points out that teens today have also had many other freedoms removed as well, including places to hang out. Many modern development neighborhoods lack public parks, malls actively discourage teens from hanging out. (The local outdoor shopping center near my house, I am given to understand, will not entertain the idea of teen-centric stores going in because it will increase youth traffic. They also play music that the Weather Channel would refuse to play in the Local on the 8’s weather reports quite loud as a further deterrant. Judging by the crowds of teens there on weekend nights, it’s not working.)

We’ve since relaxed, a lot. My son spent much of his 7th grade year hanging out after school with his friends. Part of this hanging out was to actually leave campus and go over to  the main drag in that part of town city where the local college students tend to hang out. It has a fun mix of eclectic, trendy, and the usual assortment of chain stores. Their big thing was to go into CVS, buy milk, and then go back to school to hang out. This year, school has enacted a 3:45 rule that no one is allowed on campus after that time except for approved activities. Now he comes home early and only sees his friends on weekends, when schedules permit.

What does this leave him and the vast numbers of teens in the same situation? Social media. When a parent says that their kid is always online and being completely anti-social, they are completely missing the point. Their teens are being completely social. They are using the tools at hand to make up for what has been taken away from them from what they need as growing, developing adolescents. boyd points out that in those rare cases where teens really do show the signs of actual addiction, you have to ask what is the underlying cause? It’s not the technology. Take it away, and it will be something else.

Why are things this way? Why have teens had their freedoms taken away? Why do parents misinterpret why they are online so much? What’s really going on here? There are two key factors at play here: First, mainstream media is a business, first and foremost. The companies only survive by getting eyeballs. So, the stories that get printed are the stories that sell. Two girls abducted by someone on My Space? Headlines. Later discovering that they were lovers and trying to escape their parents and My Space had nothing to do with it? Hardly mentioned. Sensationalism sells. Noam Chomsky2 has written a great deal about how the media distorts the truth because it can only print the stories that the public accepts. If the common zeitgeist is that social media is bad and teens are in danger, that’s what they will print. Otherwise, they risk losing customers because they are no longer printing “the truth.” Somewhere along the way, the idea got out that the Internet was a scary place full of sexual predators and causing horrible addictions, and so forth and that meme stuck and now is accepted as the truth with no evidence to back it up. Just scanning my daily search agent for teens and social media this morning, I find articles blaming social media for out-breaks of eating disorders, infantilizing the brain, and other such things. It’s self-reinforcing and, while a book like boyd’s will help, it will take a lot more than just this book to adjust people’s mindsets. It may be that we simply have to wait a generation. (At which time, our kids will be railing against the new-fangled thing their kids are into!)

Some weeks back, a review of the book was posted to the Atlanta Journal-Constitution website. One of the comments illustrates the tenacity of these memes beautifully. “Parents have gotten so lax, when the possibility of foul play is so huge, despite what this book states” (emphasis mine). I replied, “The book is well researched, thoroughly documented, and states, quite clearly, that the danger is way overblown. Do you have sources for your contention that boyd is underplaying the risk?”

boyd’s book is a healthy, and much needed, dose of common sense and it should be required reading for all parents of teens. Parents need to be informed about their kids social needs and about how the technology works. They also need to relax and stop locking their kids up inside in a misguided attempt to keep them safe. And they need to learn the difference between a new way of socializing and having friends and when someone is really in trouble. Then they can make informed decisions and we can all stop the knee-jerk reactions that aren’t helping anyone.

1 danah boyd on the capitalization of her name. (Jump back)

2 See www.chomsky.info and, particularly, this Huffpost article that does a good job of summarizing Chomsky’s controversial views in this area. (Jump back)

This is a site about parenting, teens, social media, leadership, being online, and other topics that fall into those buckets or at least near them. The idea is to help us understand our modern world, how it is changing what it means to be a kid, a parent, a leader, a citizen, and a human being; to help us navigate these waters.

There are no charts…